The gastronomic scene in New York is as broad and cutthroat as the city itself. Restaurants in an international metropolis with star chefs like Tom Colicchio, Daniel Boulud, and Jean-Georges Vongerichten must differentiate themselves by their menu and design. Several Michelin-starred restaurants in Manhattan, Queens, and Brooklyn serve cuisines from all over the world.

Our best restaurant architect companies, listed below, have created restaurants that continue to influence the ever-changing New York City restaurant landscape and have earned the industry’s most prestigious honors. Interior Design Magazine placed Stonehill & Taylor Architects 85th among the Top 100 Design Giants in 2021. Architizer A+ also named it a Commercial Interior Design Winner. Aside from these honors, the firm’s work has appeared in magazines such as Madame Architect, World Architecture News, Hospitality Interiors, and Inspire Design. About Rockwell Architecture, Planning and Design

Rockwell Architecture, Planning and Design is headquartered in downtown New York and has satellite offices in Los Angeles and Madrid. The firm specializes in a wide range of projects, including the luxury hospitality, cultural, healthcare, educational, product, and set design sectors. Interactive tech, handcrafted products, custom fittings, and furniture combine to create settings that effortlessly merge technology, craftsmanship, and design.

This 250-person company, founded by David Rockwell, FAIA, and directed by David and partners Shawn Sullivan and Greg Keffer, integrates performance and architecture to create unique experiences and constructed environments worldwide. After more than three decades of hard effort, Rockwell Architecture, Planning, and Design was named one of Fast Company’s Most Innovative Dining Companies in 2021. It was also covered by prestigious publications such as Archinect, ABC News, Forbes, and Bloomberg. Bentel & Bentel, founded in 1957, has a solid reputation in architectural design and planning. The firm was created by the late Dr. Frederick R. Bentel and Maria A. Bentel and is now led by Dr. Paul Bentel, Peter Bentel, and Dr. Carol Bentel. The current principals have extensive experience in the fields of art and design. Paul is a Harvard alumnus who has taught at Harvard, MIT, and Colombia. Peter worked as a sculptor in Pietrasanta, Italy, and he has lectured at prestigious universities worldwide, including the National Autonomous University of Mexico, the University of Tokyo, and the Milan Polytechnic. Carol was a Fulbright Scholar at the University of Venice and was formerly the national chair of the AIA Committee on Design, with more than 10,000 members.

With this strong background, it is not surprising that Bentel & Bentel has won multiple James Beard Awards for Best Restaurant Design, or that all three principals have been inducted into the Hospitality Design Hall of Fame. Biber Architects is a well-organized, highly skilled team of architects and designers with over 30 years of expertise in New York and worldwide. James Biber leads the firm and imaginatively drives all of its projects from the initial meeting to the opening party, often producing the client’s next project and the next. Mr. Biber has spent over 25 years working in an interdisciplinary setting. His work is based on the idea that architecture is a statement of identity intrinsically related to its language of form and tectonics.

CCS Architecture was created in 1990 by Cass Calder Smith. The team of 30 designers and principals now works out of two offices: one in New York City, between the trendy areas of Greenwich Village and SoHo, and another in San Francisco. Smith has led the business to critical praise in the pages of Dwell, Architectural Record, The New York Times, and Metropolis, supported by colleagues Taylor Lawson, Barbara Vickroy, and Melissa Werner. CCS Architecture has also received awards from James Beard, AIA Los Angeles, and the International Interior Design Association for their restaurant designs.

The business works on projects in the United States and worldwide where people can eat, live, shop, vacation, work, exhibit, and create. Having been in the industry for over three decades, it has successfully worked for individuals, businesses, and non-profits to deliver creative solutions through a process guided by leadership, listening, innovation, and collaboration. 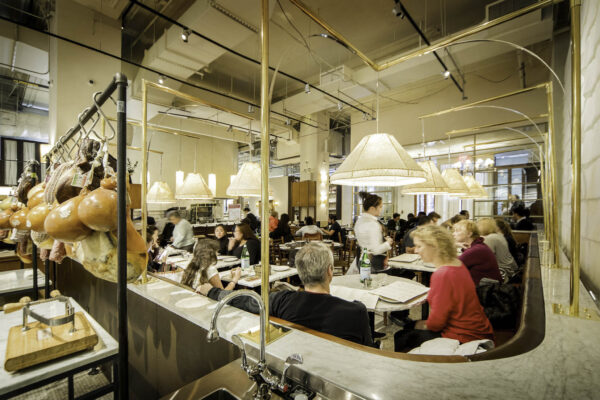 Richard H. Lewis is a sole proprietorship with two offices on Manhattan’s Upper West Side. Richard H. Lewis, as principal, is hands-on in his work, supervising the planning and construction of each project in the office. The firm has completed many projects and developed a reputation for being attentive to clients’ design objectives, budgets, and timelines. Restaurants, high-end retail stores, commercial and industrial bakeries, office developments, non-profit offices, apartment complex renovations, private townhomes, individual apartment renovations, new house construction, and house additions are among the firm’s projects.

Lewis has been creating hospitality settings that set trends and crystallize paradigms in New York’s high-end dining scene since 1982. Lewis’s creations have been featured in publications such as Interior Design, The New York Times, New York Magazine, and The New York Post. Via Carota, Pisellino, Pastis, the bar at Momofuku Ko, Momofuku Kawi, The Great Northern Food Hall, Urban Space Market at 45th and Vanderbilt, and legendary New York locations like Balthazar and Tavern on the Green are among those developments. The company also creates upscale retail spaces, offices, and private residences. Brad Cloepfil launched Allied Works in 1994 in Portland, Oregon. Mr. Cloepfil has earned recognition for his work on creative workplaces, academic facilities, and cultural establishments, as well as for creating strong venues for art and interaction. Since its inception in 2000, the firm has steadily expanded through the execution of large museum projects, unique educational facilities, dwellings, and workplaces of varying scale, function, and style. Allied Works Architecture is a 40-person firm based in Portland, Oregon, with offices in New York City. The firm develops designs that ring true with their specificity of place and purpose, as they are driven by craft and innovation concepts.

Using a research-based approach, Allied Works captures the essential concepts that drive each of its projects and translates them into material, shape, and structure—architectural designs that engage public imagination and enrich a city’s cultural legacy. Creme Studio is a Brooklyn-based design company specializing in architectural, interior, graphic, and custom furniture design. The firm’s services are coveted for its one-of-a-kind ability to develop distinct stories and immersive surroundings for a diverse spectrum of clients. Its growing team of young architects and creative experts works on projects worldwide, including private houses, hotels, restaurants, and retail outlets.

Jun Aizaki, the founder and principal of Creme Studio, moved from Japan to New York City in the early 1990s before graduating from Pratt Institute School of Architecture. Aizaki founded Creme in 2004 after working for a few years with the renowned firm Rockwell Group and obtaining an IHMRS Gold Key Award for Best Restaurant Design. Creme is now a critically acclaimed, internationally recognized design studio. The Wave of the Future Award was given to the Williamsburg, Brooklyn-based company by Hospitality Design. Crème has also garnered comparable praise from The New Yorker, Interior Design, Architectural Digest, New York Magazine, and Food & Wine. Wid Chapman, an AIA member and founder, studied architecture at the Rhode Island School of Design before chairing the interior design department at Parsons School of Design. Since establishing the firm in 2003, Wid has become an authority in lifestyle design, with projects featured in Hospitality Design, New York Magazine, Interior Design, and The New York Times, as well as international publications found in Japan and India. 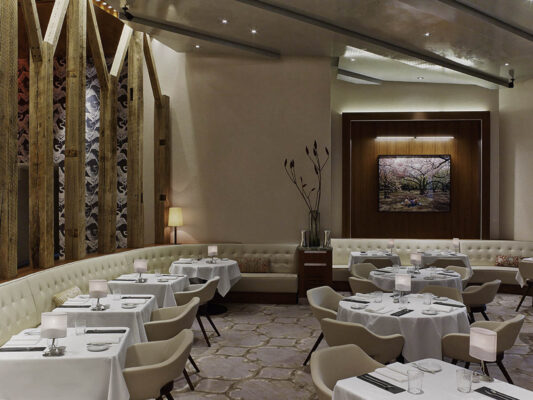 During its two decades of operations, Glen & Co. Architecture has received notable recognition, including a nomination for the coveted James Beard Award for Outstanding Restaurant Design in 2015. Glen Coben, a Cornell University alumnus, leads a team of architects and designers on projects recognized by The New York Times, Architects + Artisans, and Architectural Digest.

Coben’s background is extensive, having worked with SITE on projects in Tennessee, Hiroshima, and Yokohama. He also worked for Nike as the Director of Store Planning and Retail Design. “An Architect’s Cookbook, A Culinary Journey Through Design,” Glen’s book, looks behind the scenes of many of the firm’s restaurant designs and includes recipe contributions from each chef. ORO published the book in October 2018. David Bucovy Architect is a Brooklyn-based architecture practice dedicated to bringing exceptional design to its clients. The firm provides all architectural services, including design, construction papers, building code analysis, collaboration with local and state agencies, bidding, negotiation, and construction administration. Its customers receive highly individualized service that gives them control over the design and construction process.

The firm’s design exists in a dual conversation where aesthetics and utility coexist alongside the most rigorous construction details and exchanges with the building crew in the field during construction. David Bucovy Architect’s projects have appeared in the pages of Eater New York, Architectural Digest, Bloomberg, Cultured Magazine, and Westchester Magazine. Crown Architecture & Consulting was established in 2008, just days before the biggest economic meltdown since the Great Depression. Under the direction of founding partner Michael V. Santora, the firm specializes in architecture, interior design, sustainability, master planning, urbanism, and real estate contract review services. Crown’s principals have laid the groundwork for the practice to be one of the few professional services firms that grew significantly during recent trying times. The firm did so through customer retention from previous senior corporate roles, persistence, ethical work practices, and consistently delivering an appealing final product.

Crown has developed a vertically integrated strategy that combines architecture, due diligence, code consultation, and expediting under one roof. The experts on board are also the best in the field, are LEED-accredited professionals, and are Lead Abatement Certified through DCA. A deep dedication to the individual and their experience of an interior is at the heart of the studio’s work. It hand-crafts settings that allow customers to build personal and long-lasting relationships with their interior spaces by carefully studying a project’s context and a client’s lifestyle, attention to utility, and a passion for blending different materials, textures, and styles. 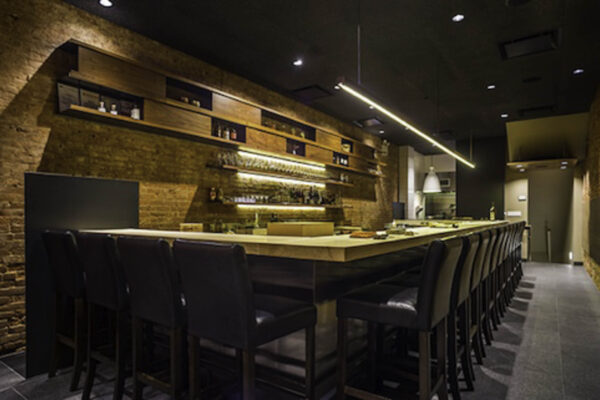 Richard Bloch Architect, founded in 1986, is an internationally respected group of affiliated architects and interior designers who provide distinctive, one-of-a-kind solutions to the restaurant and hotel industries. RBA is known for its designers’ inventiveness, adaptability, and multilingual employees. They collaborate with owners, chefs, and other consultants to produce integrated solutions that bring clients’ thoughts and ideas to reality. The firm has executed hundreds of projects worldwide, and you’ll find its works in airports, hotels, malls, office buildings, standalone PAD structures, museums, and stadiums.

Since its inception in 1986, the agency has completed hundreds of projects, with some of its work appearing Insatiable Critic, Hospitality Design, Eater, and The Robb Report.

Learn the about the best architects in New York City. See rankings of the top architects and examples of their work they are designing.

Find out how much your project will cost
We will get you competitive bids from the top architects
and contractors in your area.
By submitting the form, you agree to our Terms of Service.